Click here to learn about the NEW Prepare to Care digital course! 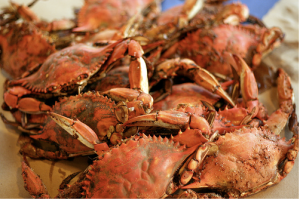 For two straight Sundays, I’ve eaten fresh steamed crabs with a perfect drizzle of my husband’s secret seasoning, shake and bake style! I’m a Marylander and so with age, I’ve perfected my skills of getting chunks of sweet crab meat. When I crave crabs, I go to my husband who steams them fresh, but suppose you had a craving for crab soup? Where would you go to satisfy that? Philips? Greystone Grill? Well, based on the outcome of The Capital 21st annual Crab Soup Cook-Off this Saturday, you might consider going Riderwood.

That “restaurant” might not ring a bell… unless you’re familiar with the world of retirement communities (CCRC’s) in Maryland (Don’t I get the advantage=)).  This past weekend, Riderwood, a CCRC and also my former employer, competed in The Capital 21st annual Crab Soup Cook-Off at the Maryland Seafood Festival.  19 restaurants across the state and the DC area, including Philips, competed in various categories and Riderwood Catering won first place for the Judge’s choice for vegetable crab soup, third place in the People’s choice for vegetable crab soup and third place in the People’s choice for alternative crab soup.  I worked at Riderwood in 2009 when they first entered this competition and each year, they’ve continued to take home honors.  Consider Riderwood Catering a true hole in the wall restaurant.
For my many friends who always assumed my life working in seniorcare was quite a bore, it’s a whole lot more than rewarding. There’s fun involved too.
To read more about this year’s cookoff, visit www.hometownannapolis.com.
For more information about the Maryland Seafood Festival Crab Soup Cookoff, visit www.mdseafoodfestival.com.
Share on facebook
Facebook
Share on linkedin
Linkedin
Share on email
Email
Share on pinterest
Pinterest